Today I weighed in and was very happy to see that I have lost 4.6 pounds!  My body is detoxing from the carbs and I am feeling alot better.  Fewer cravings and more energy.  Maybe you are curious what I ate last week, if I was starving or miserable eating bird food.  Well, I can tell you that I was not eating lettuce and carrot sticks and that I prepared some pretty tasty meals that we will definitely eat again at our house!

Here are some ideas and recipes for those of you who are interested.

Breakfast is the least exciting.  I mostly drank Muscle Milk Lite protein shakes and ate eggs and turkey bacon. As I mentioned before I don’t have an issue with cholesterol so eggs are a big part of my diet even when I am not “dieting.” But I did make some “breakfast cupcakes” which are basically egg casseroles cooked in cupcake tins.  I experimented two variations on the recipe.  One batch was prepared with low-fat Jimmy Dean sausage, organic brown eggs, full fat Mexican blend cheese, and a pepper/onion saute.  The other variation included the onion and pepper saute but I used egg beaters, low-fat cheddar cheese and real center cut bacon crumbles. 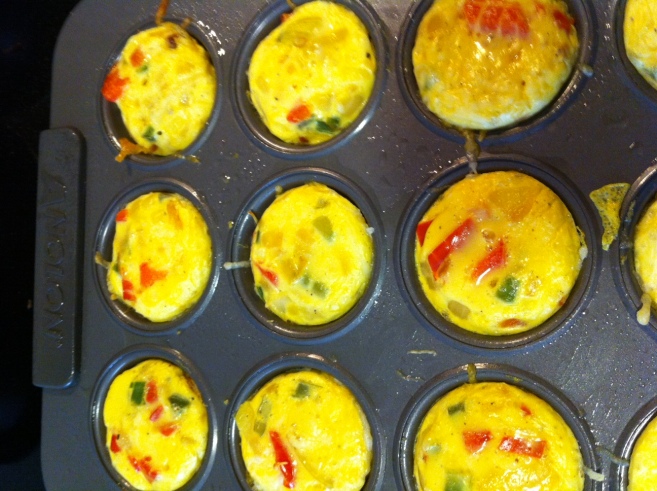 For each variation I sprayed the cupcake pan with PAM, then layered the meat at the bottom, then the cheese and then I mixed the onion and pepper saute with the eggs and spooned the liquid into the pan over the other ingredients. So one version was full fat and the other was low-fat, except for the bacon crumbles.  After tasting both I can honestly say I enjoyed the low-fat one with the bacon more than the full fat one with the sausage.  Using one full fat ingredient alongside the other low-fat ingredients was just enough of a compromise to make it healthy and tasty.  These refrigerate and freeze well so I have about 30 little breakfast casserole cupcakes that I can eat for the next week or so. 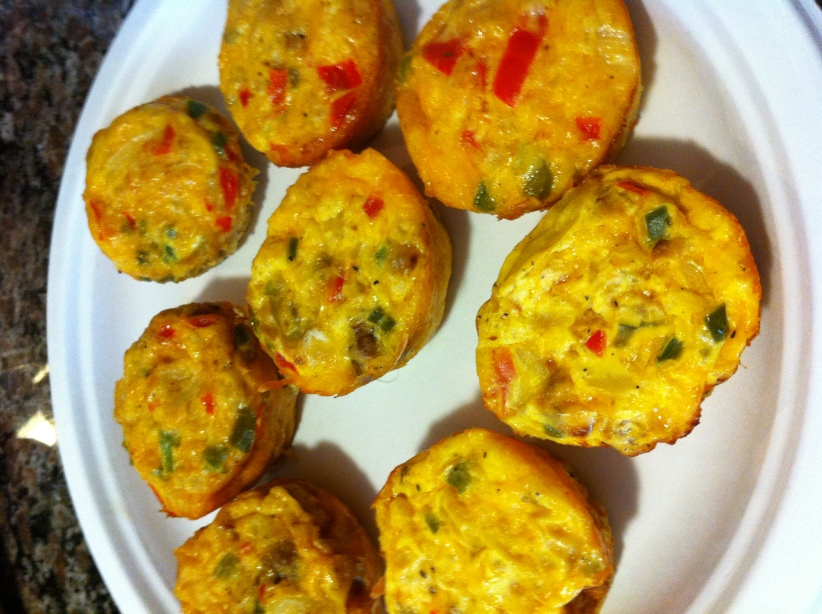 Lunches for me are usually left-overs from dinner so I will go on and fast forward to the dinner ideas.

Indian “Butter Chicken” I used a package of Indian spicy paste where all you do is add a cup of water and 3 tablespoons of butter, then cook the chicken in the sauce for about 20 minutes.  Very easy and tasty the spicy paste makes this a no brainer.  Served with steamed broccoli as I love broccoli with any kind of spicy sauce like this and I made a small portion of rice for Brian.

Baked Pesto Chicken I pretty much stuck to the recipe straight out of the South Beach Diet cookbook (a close variation can be found here) except I used full fat fresh off the farm mozzarella that I sliced into medallions and layered on top of the chicken during the last 5 minutes of baking.  I served this with brussels sprouts. 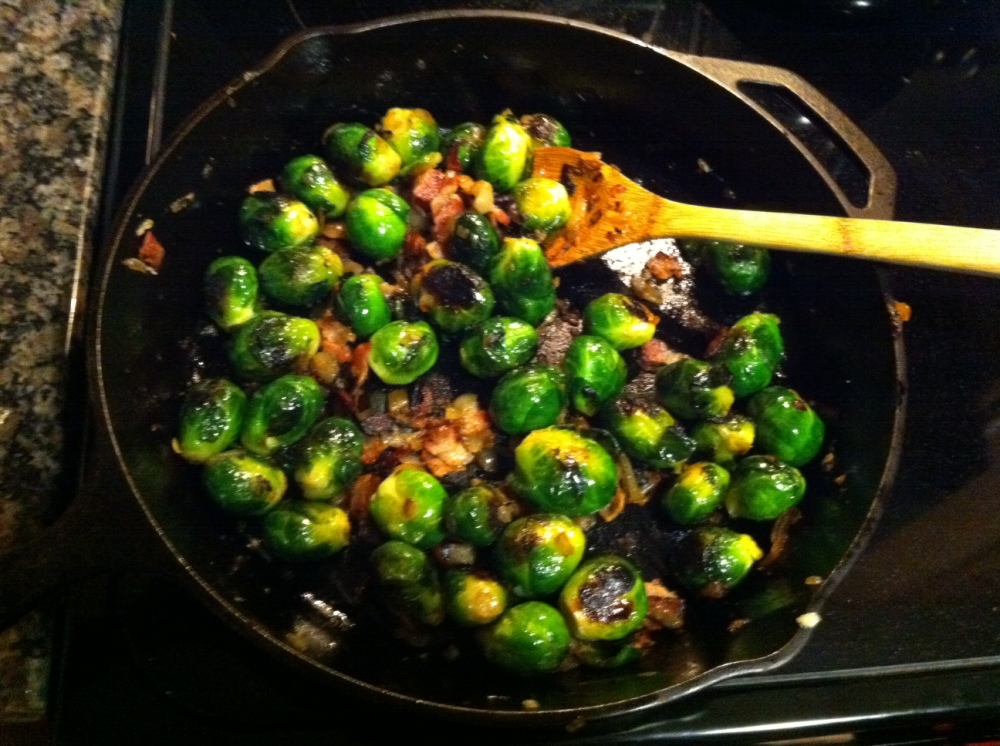 I didn’t like brussels sprouts until I had them prepared by my friend Melissa.  She cooked them with a little bit of diced bacon and onion.  I did this only I started the saute in my cast iron skillet to get a good caramelization going on before finishing them off in a hot oven.  These were tasty and now I like brussels sprouts which is good since they are a super food and I need all the super I can get. Here is a close variation of what I did by Sunny Anderson.

Tequila-Lime Flank Steak I used Guy Fieri’s recipe. We don’t have a grill but broiling the flank steak is a great alternative if you don’t or can’t grill a steak.  This is so stinking easy to prepare.  I LOVE limes so I think the flavor here is amazing. 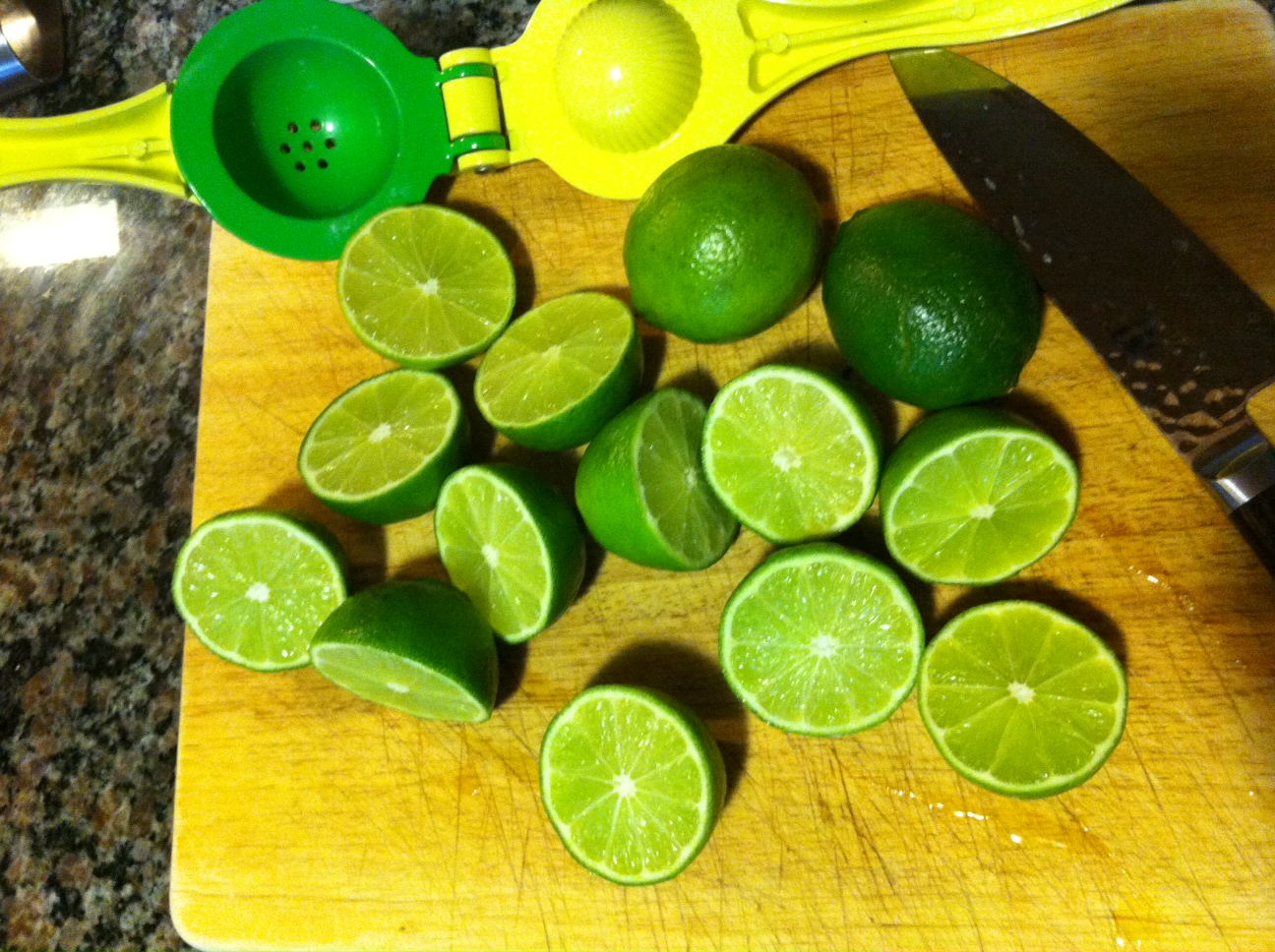 However, I did NOT use a cup of garlic as the recipes calls for! You can enjoy the left overs on a salad or like I did: rolled in a soft corn tortilla.  Served this with prosciutto wrapped asparagus, except I used speck instead of prosciutto which is just smoked prosciutto.  Delish.

Chicken Tortilla Soup I used the pioneer woman’s recipe.  The addition of cornmeal is probably not that South Beach Phase 1 friendly but I added it anyway, it was only 3 table spoons and it made a big difference.  I also left out the tortilla strips.  I actually tried to bake them first and that didn’t work out quite so nice, I think it was a sign to leave them out! 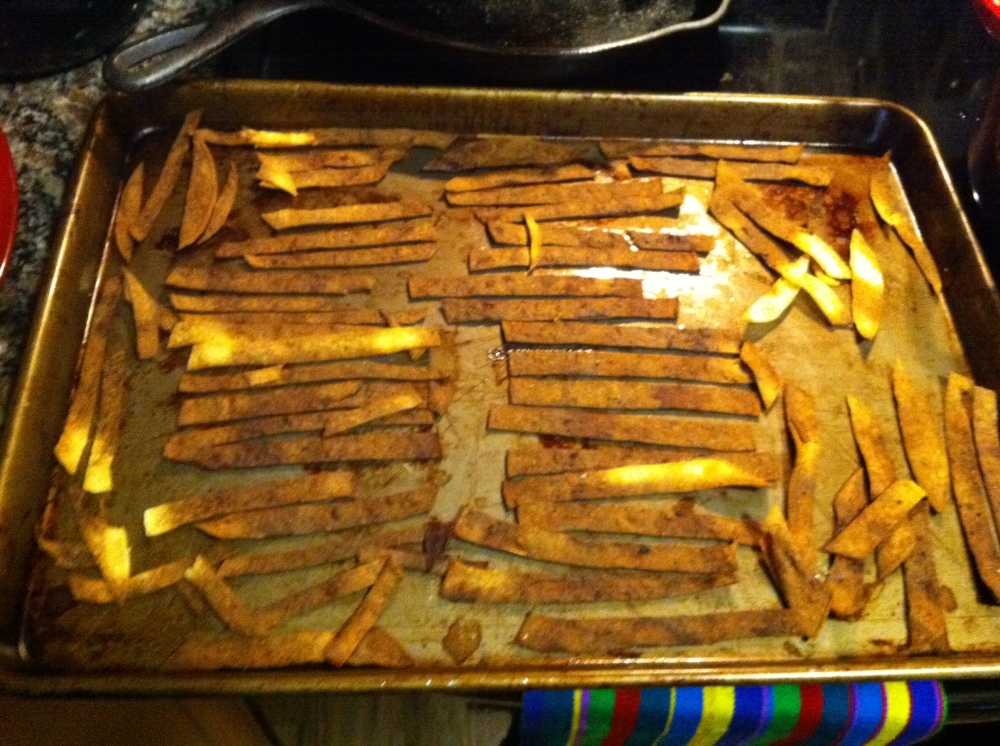 The other two nights we had chicken kabobs from Moby’s (I had a chicken kabob salad) and we had home-made taco salads (ground beef, lettuce, tomato, cheese in a bowl.)

Drinks I basically drank water the entire week. I had a few Coke Zeroes and my daily coffee with fat-free cream and Truvia. I also had a few hot chocolates after dinner a couple of nights.  We have a Keurig and 1 Swiss Miss K cup is 60 calories!  I also had a few pieces of dark chocolate here and there.

So there you have it.  This was my healthy eating plan for last week and I lost nearly 5 pounds this way.  I know some of you will be skeptical with my bacon and my full fat cheese but I will harp on this: every one has a different body chemistry and we can’t all eat the exact same way and be healthy.  We have to figure out what works with our own personal body composition.  I suppose that technically I “cheated” a little but again, this is about a lifestyle change that is flexible that I can actually live with.

In other news, I finally exercised today. It was nice out so I pushed LK int he stroller for about 40 minutes.  It wasn’t much but its a start!