Spring fever is associated with multiple varied stereotypes from twitterpation (the Bambi kind) to spring break for grown-ups (HH) this is the time of year that everyone gets antsy for something new.  In my case, I tend to get excited about weddings.

As I have previously posted here at my living canvas, I have proudly stood up for 17 brides as a bridesmaid, and my own wedding was number 18 in 2005.  Since then my wedding involvement has been limited to showing up and handing out programs at the door (which doesn’t count as being in a wedding, btw).

But today I am excited to share with you that I am going to be in my 19th wedding on May 30.  🙂  My best friend Jenny will say “I do” in beautiful Greensboro, GA and I couldn’t be happier to join her on this blessed day.

And, in addition to being a bridesmaid nearly 20 times now, I may be adding a new category to the role of wedding party participant: 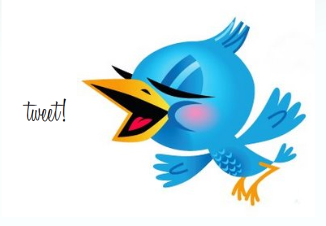 Another friend planning a fall wedding here in NoVa sent me a message today that has my mind spinning with possibilities.

An emerging trend in the bridal scene is changing the way couples choose to share their special day with distant relatives and friends.

Imagine being at a wedding and seeing someone in the crowd typing furiously on their phone or laptop as if they didn’t even know there was a life changing celebration going on just feet away. Would you say something to them? Would you simply dismiss it as a rude inconsiderate act? Well, don’t be too quick to judge. This person could be immersed in their own little digital world at the exact request of the bride and groom. Allow us to explain.

A recent press release by Hitched.co.uk suggests that engaged couples now need to begin appointing a new key role in their wedding party. They explain that along with your Best Man and Bridesmaids, you now need to make sure you choose someone to be your Chief Twitter.

On their website, Hitched.co.uk even goes as far as suggesting the ideal main elements that make up the duties for this new wedding role:

– The Tweet of Honor will be required to register an Twitter address for your wedding day : Example: BobSue2009
– The Tweet of Honor will email your virtual guests with the address so they can follow along during the day
– This person will also update Twitter frequently throughout the big day so everyone know when the couple arrives at the church and the exact moment the vows are exchanged.
– Also be required to read out any messages of good luck that have been sent back after the event.

So, today when I saw on my twitter @reply that a dear friend and southern bride to be asked me: “If I get your Iphone a corsage will you?” and included the link to the blog above, my entire wedding spring fever took a technological turn.

If I get to add tweet of honor to my bridal portfolio Guinness will SURLY allow me to set that record!