Today we hear from my friend Heather Algar. 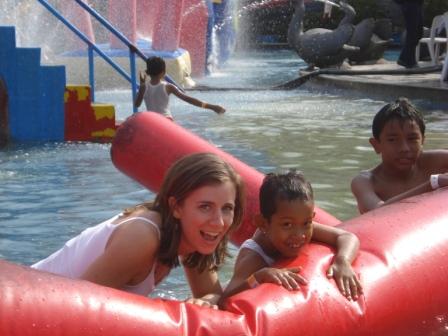 I decided to sponsor a child during my mission trip to SE Asia because of the children. Not only did the children we met adore their sponsors, they truly benefited from and enjoyed the experience that was made possible for them. Denis is my sponsor child. I first met him in Church, where he was sitting with his mother. They are both Muslim. I remember thinking that he was one of the most fragile and shy eight-year-olds I had ever met. I learned that he doesn’t have much of an appetite, and his mother told me that she always has to encourage him to eat. When I discovered that he liked the Goldfish crackers I had brought, I left him my two snack bags.

I consider myself extremely blessed to have had the opportunity to meet Denis and his family. I was especially humbled when given the opportunity to visit his house. He lives with his mother and uncle in a tiny two-level house. His father visits rarely from a large city several hours away, where he works to send home money for the family.

It is hard to describe their living conditions, mostly because I have never seen anything like it, and I can’t imagine what it would be like to live there, having only visited for a few minutes.

To me, the living room was more like a hallway with two couches that lined the way from the door to the dirt-floor kitchen. Two steps more, and I found that cramped under and beside the stairwell was an area separated by a curtain. This served as the bathroom, with a small plastic bin for bathing.

Upstairs I walked down the open-air hallway and visited Denis’s room, where the worn out mattress occupied the entire space. Through two translators (English to two different native languages), I learned from Denis’s Uncle that he had built the house.

My favorite memories with Denis and his mother were created during his first experience to a water park. We started with the haunted house, and while moments before we entered he was almost too shy to speak, he ended up clinging to me the whole way through. It’s amazing how fear can bond people so quickly! 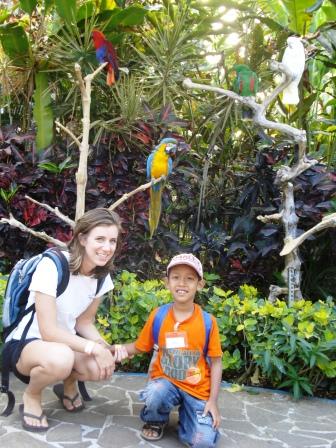 My life has been impacted by this boy Denis and our experiences. He is a constant reminder that whatever troubles I may be having, there is someone who is having a much harder time. It brings me joy thinking that I am making a difference in someones life, probably more than I realize. I’m sure that I will sponsor another child someday, but I would like to meet them first!